Performance and fascination: The design

With the Audi e-tron, Audi Design has translated the brand’s fundamental design language for the electric age, both inside and out. New, stylistically defining details, such as the special daytime running light signature, the electric charging flap, the lack of exhaust pipes, and stitching on the seats reminiscent of an electric circuit board, transmit a clear signal that the Audi e-tron is fully electric.

Typically for one of the brand’s SUV models, the Audi e-tron bears the octagonal-design Singleframe grille with vertical struts. Its corpus is largely enclosed and presented in platinum gray – identifying it as a fully electric model. At the lower edge of the Matrix LED headlights, four horizontal struts create the e-tron-specific signature in the daytime running lights. For the first time this is integrated directly into the headlights – another exclusive design feature for the all-electric drive system. Light is used as a core design feature.

The wrap-around shoulder line is an important design element in the side view. It extends from the headlights, along the flanks, to the rear lights, giving the Audi e-tron a low visual center of gravity. The roof stretches low across the muscular body, which displays clear

SUV attributes with its brawny D-pillars and the underbody protection. The quattro blisters over the wheels hint at the electric all-wheel drive. The sill area is boldly contoured and visualizes with the black inserts on the door trim the location of the battery and thus the energy center of the Audi e-tron.

At the sculpted rear end, the long roof edge spoiler and the wide diffuser emphasize the horizontal and thus the sporty character of the electric-powered SUV. A light strip – a typical feature of Audi’s top models – connects the LED rear lights. With their horizontal emphasis and segmented appearance, the tail lights echo the graphics of the daytime running lights. Transverse louvers on the sides of the diffuser draw attention to the lack of exhaust pipes, once again spotlighting the all-electric drive system.

At market launch the electric SUV will be available in a choice of ten colors, including the exclusive shade Antigua blue. The e-tron logo on the electric charging flap and optionally the brake calipers stand out in the high-voltage signal color orange. The wheel arch trims and sills are in a contrasting color, to emphasize the off-road look.

The interior of the Audi e-tron stands for performance, intelligence and lightness – attributes that are manifested in an array of details. Design and technology are fused into one. A generous arc, the wraparound, envelops the cascading instrument panel with pronounced horizontal lines as far round as the sculptural door trims. It harmoniously integrates the hood above the Audi virtual cockpit, whose sleek display stands visually free in space, as well as the displays of the optional virtual exterior mirrors. These mirrors are used for the first time in a volume-production automobile in the Audi e-tron, taking in-car digitization to a whole new level.

The entire driver’s area has a driver bias, and the two MMI touch response displays are angled in the driver’s direction. When off, the upper one blends almost invisibly into the large black-panel surface. In clear contrast, the lower display is incorporated into the broad center console. Options include the multifunction buttons on its edge and the control element for the lighting functions in black-panel design with touch response technology

Both touch displays present all images and information on a black background. Generally the graphical user interfaces have been deliberately reduced and clearly structured so that the information can be assimilated quickly. All pictograms are precisely dimensioned, a few subtly animated.

The center tunnel console rests on open sidewalls, which lend it the feel of a light, sleek sculpture. In addition to a stowage compartment, it also incorporates cup holders as well as the optional Audi phone box. This layout combines lightness with functionality. The hand rest appears to float above the console. It incorporates the shifter and the function for the electronic parking brake. The driver selects the drive position in a one-touch action with their thumb or index finger. Shifting gears becomes a brand-new experience.

Precision personified: electrification down to the last detail

In every equipment line, the Audi e-tron features carefully coordinated upholstery materials, colors and inlays. Whether refined Valcona leather or dark brushed aluminum for a sporty look, the electric SUV meets the highest quality standards in terms of craftsmanship and choice of materials. Applications in open-pore, grained ash are available exclusively for the Audi e-tron. The stitching on the seats creates a motif reminiscent of electric circuit boards. Contrasting stitching adds accents. On the customized contour seats, it and the piping are bright orange – a cue borrowed from the high-voltage electrical system.

In the dark the optional ambient lighting package with its white LED lights effectively brings the interior to life. It softly illuminates surfaces such as doors and the instrument panel, making them appear to float. The contour/ambient lighting package with 30 adjustable colors provides a further upgrade. It also precisely traces the elemental lines of the interior. With this option, the e-tron logo with its unique graphic extending over the entire width of the passenger side is backlit. A standard feature is the welcome sound that plays when the engine is started to signal that you have entered a luxury lounge. 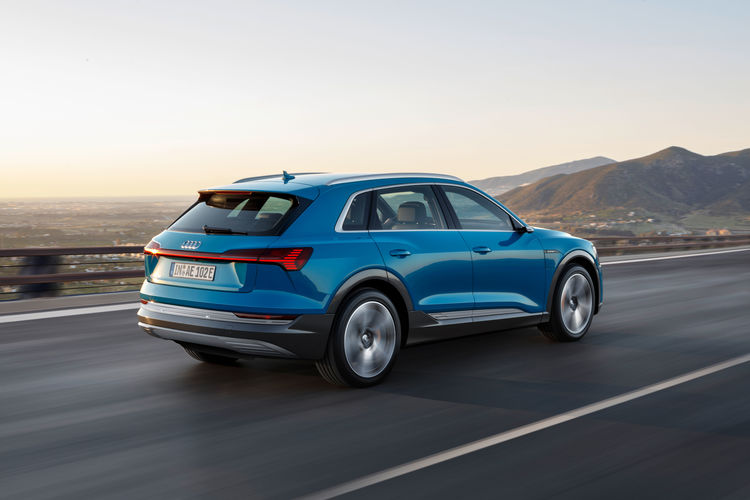