Efficiency, performance and quiet tranquility – the Audi e-tron offers the driving experience of a new era. Two electric motors drive the electric SUV powerfully, free of emissions, and almost silently, with a system output of up to 300 kW. Its high-voltage battery stores 95 kWh of energy to provide a range of over 400 kilometers (248.5 mi) in the WLTP cycle. The Audi e-tron is thus predestined for long distances. The new electric all-wheel drive system combined with cutting-edge suspension solutions provide for optimal traction and handling in all driving situations and any weather.

The Audi e-tron offers driving pleasure in a new dimension. With 265 kW and 561 Nm (413.8 lb-ft) of torque, the two electric motors accelerate the electric SUV from zero to 100 km/h (62.1 mph) in 6.6 seconds – with no hesitation and virtually silently. The asynchronous motors can deliver this peak performance for up to 60 seconds. This way, they allow the vehicle to accelerate from a standstill to the electronically limited top speed of 200 km/h (124.3 mph) several times consecutively without output losses. The start-off performance, for example at a traffic light, is comparable to that of a sports car. The maximum drive torque is present within fractions of a second and provides enormous torque. The front electric motor, which is positioned parallel to the axle for the purpose of optimum packaging, achieves a peak output of 125 kW at 247 Nm (182.2 lb-ft) of torque. The rear, coaxially positioned motor reaches an output of 140 kW with a torque of 314 Nm (231.6 lb-ft). Two-stage planetary gearboxes with one gear range transfer the forces to the axles via the differentials.

Asynchronous motors can increase their output for a short period of time. By shifting from drive range D to S and fully depressing the right-hand pedal, the driver can activate boost mode. It is available for eight seconds. Here, the drive produces 300 kW of system output and 664 Nm (489.7 lb-ft) of torque. The Audi e-tron then sprints from 0 to 100 km/h (62.1 mph) in 5.7 seconds. The forces are distributed as follows between the electric motor at the front axle and the one at the rear axle: 135 kW of boost output with 309 Nm (227.9 lb-ft) of torque at the front, 165 kW with 355 Nm (261.8 lb-ft) at the rear.

The two asynchronous machines (ASM) of the Audi e-tron offer major design advantages. They do not produce any electrically induced drag losses in the deenergized condition, which makes them highly efficient. Not only are they lightweight due to the aluminum rotor, they require little maintenance and are particularly robust.

Every motor in the Audi e-tron is supplied and controlled by its own power electronics module, which works together closely and extremely dynamically with the drive control unit. All requests come together in the drive control unit – from the accelerator pedal, the brakes, or the electric all-wheel drive. The power electronics modules read in sensor data 10,000 times per second and output current values for the electric motors.

This results in the optimum use of output during dynamic vehicle operation in particular. Some functions, such as vibration damping and the slip control functions, are integrated into the power electronics directly. This enables the deceleration-free translation of interventions and improves, for example, the vehicle’s ability to accelerate on icy roads significantly.

The two structurally identical power electronics modules are positioned on the housings of the electric motors and are integrated into the thermal management system of the drive system. They take up little space, and each weighs only eight kilograms (17.6 lb); this is also thanks to their aluminum housing. The pulse width modulating inverter, its central component, converts the direct current from the battery into three-phase current. When the electric motors operate as a generator during recuperation, it converts the generated three-phase current into direct current and feeds it back to the battery.

Agile in any terrain: electric all-wheel drive and suspension

In the Audi e-tron, the brand with the four rings introduces a new quattro generation as standard: electric all-wheel drive. It continuously and fully variably regulates the ideal distribution of drive torques between the two axles – within a fraction of a second. That enables the electric SUV to achieve optimum traction in all weather conditions and on any type of surface.

In most cases, the Audi e-tron mainly uses its rear electric motor in order to achieve the highest efficiency – the torque is generally distributed with a rear-axle bias. If the driver demands more power than the rear electric motor can supply, the electric all-wheel drive redistributes torque as required to the front axle. This also happens predictively even before slip occurs in icy conditions or when cornering fast, or if the car understeers or oversteers. Only around 30 milliseconds passes between the time the system recognizes the driving situation and when the torque from the electric motors takes effect. That is much faster than with conventional quattro technology. This is because the electric all-wheel drive system distributes electricity rather than activating a mechanical clutch. And that happens fast as lightning and with extreme precision. Full quattro performance is thus ensured even in extreme driving situations or if the coefficient of friction changes suddenly.

The key to the electric all-wheel drive is the intelligent networking of numerous control systems. The central suspension control unit integrates both the handling controller of the quattro drive and the wheel-selective torque control. If understeer is detected during sporty driving, it gently brakes the inside wheels, which are under a reduced load, thus directing the torque to the outside. The car turns into the curve and precisely follows the steering angle. Furthermore, an innovative anti-slip control system provides for high traction and stability. Wheel slip is controlled directly at the power electronics of the electric motors, 50 times faster than before and even more precisely matched to the driving situation. For the driver, this is particularly noticeable in combination with the four-stage function modes of the Electronic Stabilization Control (ESC).

This allows the driver to choose the desired level of vehicle stabilization support and enhance road performance in certain situations. The ESC therefore includes sport and off-road modes, or can even be deactivated entirely. In addition, the characteristics of the Audi e-tron can also be adapted to various types of terrain using the standard dynamic handling system. Whether relaxed cruising, dynamic cornering or excursions off the beaten track, the driver can choose between seven profiles depending on the driving situation, road conditions or personal requirements. Besides the drive system characteristic and steering boost, Audi drive select also influences the standard adaptive air suspension with controlled dampers. As a result, there is a vast difference between smooth rolling comfort and sporty, stable handling. The pneumatic springs adjust individually to the road conditions depending on the speed and the driver’s preferences, varying the ride height by as much as 76 millimeters (3.0 in) from the base ground clearance of 172 millimeters (6.8 in). On the highway, the body is lowered by as much as 26 millimeters (1.0 in), which improves stability and the aerodynamics, thus facilitating a long range. In “offroad” mode, it increases ground clearance by 35 millimeters (1.4 in). If the driver also activates the “Lift” function in Audi drive select, the body is raised an additional 15 millimeters (0.6 in) – a real advantage in rough terrain.

A key factor for the sporty character and outstanding transverse dynamics is the low and central position at which the drive components are installed. The high-voltage battery system is optimally matched to the dimensions of the Audi e-tron and is located between the axles in the form of a flat, broad block beneath the passenger compartment. That makes the Audi e-tron’s center of gravity similar to that of a sedan. Axle load distribution is perfectly balanced at almost 50:50. The front and rear suspensions are five-link designs. The standard progressive steering adjusts its generally direct ratio according to steering angle and provides speed-dependent power assistance. It becomes more direct with increasing steering angle, which provides handling advantages when maneuvering and in tight curves. The car can be moved agilely and precisely with little steering effort. Power assistance is increased at low speeds for easier maneuverability.

The large lithium-ion battery in the Audi e-tron provides for a range of more than 400 kilometers (248.5 mi) in the WLTP driving cycle. The battery operates with a nominal voltage of 396 volts and stores 95 kWh of energy. The battery system in the Audi e-tron is located beneath the cabin and is 2.28 meters (7.5 ft) long, 1.63 meters (5.3 ft) wide and 34 centimeters (13.4 in) high. It comprises a total of 36 cell modules in square aluminum housings, each of which is roughly the size of a shoe box. They are arranged on two levels, known as “floors” – a longer lower floor and a shorter upper one. At market launch, each module is equipped with twelve pouch cells having a flexible outer skin of aluminum-coated polymer. In the future, Audi will use both technically equivalent prismatic cells in its modular concept, also in terms of a multiple supplier strategy.

The cell modules in the Audi e-tron can reproducibly discharge and charge electricity over a broad temperature and charge status window. The can be densely packed to achieve a very high output and energy density in the volume available.

A cooling system of flat aluminum extruded sections divided uniformly into small chambers has the task of maintaining the battery’s high-performance operation over the long term. Heat is exchanged between the cells and the cooling system beneath them via a thermally conductive gel pressed beneath each cell module. In what is a particularly efficient solution, the gel evenly transfers the waste heat to the coolant via the battery housing.

The battery and all of its parameters, such as charge status, power output and thermal management, is managed by the external battery management controller (BMC). This is located in the occupant cell on the right A-pillar of the Audi e-tron. The BMC communicates both with the control units of the electric motors and the cell module controllers (CMC), each of which monitors the current, voltage and temperature of the modules. The battery junction box (BJB), into which the high-voltage relays and fuses are integrated, is the electrical interface to the vehicle. Enclosed in a die-cast aluminum housing, it is located in the front section of the battery system. Data exchange between the BMC, the CMCs and the BJB is via a separate bus system.

Sophisticated measures have been taken to protect the high-voltage battery of the Audi e-tron. A strong enclosing frame of cast aluminum nodes and extruded sections, plus an aluminum plate 3.5 millimeters (0.1 in) thick protect against damage from accidents or curbs. Inside, a framework-like aluminum structure reinforces the battery system. Also comprised of extruded sections, it holds the cell modules like a typecase.

Including the housing with its sophisticated crash structures comprising 47 percent extruded aluminum sections, 36 percent aluminum sheet and 17 percent diecast aluminum parts, the battery system weighs around 700 kilograms (1,543.2 lb). It is bolted to the body structure of the Audi e-tron at 35 points. This increases its torsional rigidity by 27 percent and contributes to the high level of the safety of the Audi e-tron, as does the cooling system bonded to the outside of the battery housing. Compared to a conventional SUV, the Audi e-tron offers 45 percent higher torsional rigidity, a key parameter for precise handling and acoustic comfort. 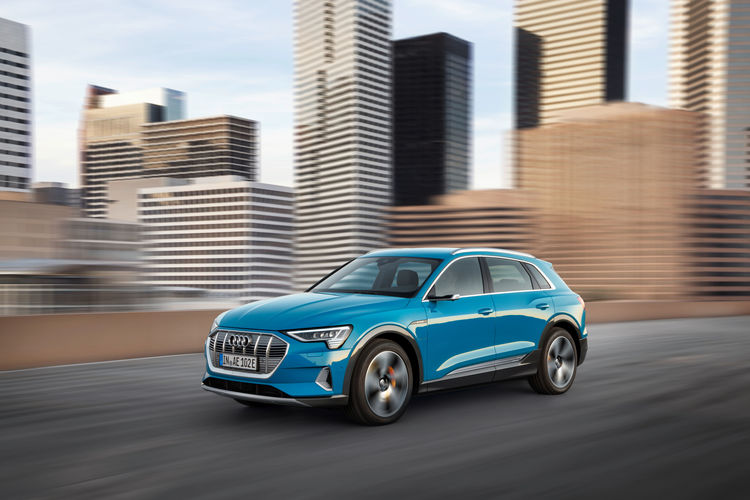